What an inspiring account by Well-being Practitioner and Sports Massage Therapist, Maria Pali about volunteering, in particular, at this year’s Brighton Marathon. Read on to find out why her role felt so important and such a privilege.

Volunteering with a Difference

2019 is turning out to be my year of volunteering.

Why do I volunteer?

For a sense of community. This is a word that is so easy to forget in our shut-away world. Volunteering allows me to give something to my local community. It allows me to connect with people locally who I might never meet. It brings us together in a shared experience.

To make a difference. Who wouldn’t want to make a positive difference to people around them? I’ve helped people to be fitter, to make new friendships, to achieve their goals.

To develop new skills. Training to be a British Cycling Coach and Breeze Champion has been one big learning curve. I had no idea there would be so much to it! From risk assessments, to creating coaching plans, to supporting and instructing. The list goes on. These skills are transferable to work situations and add to any career prospects I may have in the future.

For a confidence boost. I tend to be hard on myself and lack confidence. Seeing how positive and appreciative people are about my volunteering has made me so much more self-assured. I have a huge sense of purpose.

To make new friends. Volunteering makes me get out there and interact with people and it’s extremely social. There’s no chance of being lonely when I have so many people around me.

The club also supported cyclists at this year’s inaugural BM ride (a Cycling Sportive which
took part on the closed roads prior to the marathon).

I can’t believe how nervous I was. It felt like it was such a big responsibility. Last year I ran the
marathon and saw my cycling chums leading the race and shouted out to them and it gave
me such a boost. I really wanted to do it myself this year so put my name down when our
cycling club Chair asked for volunteers. 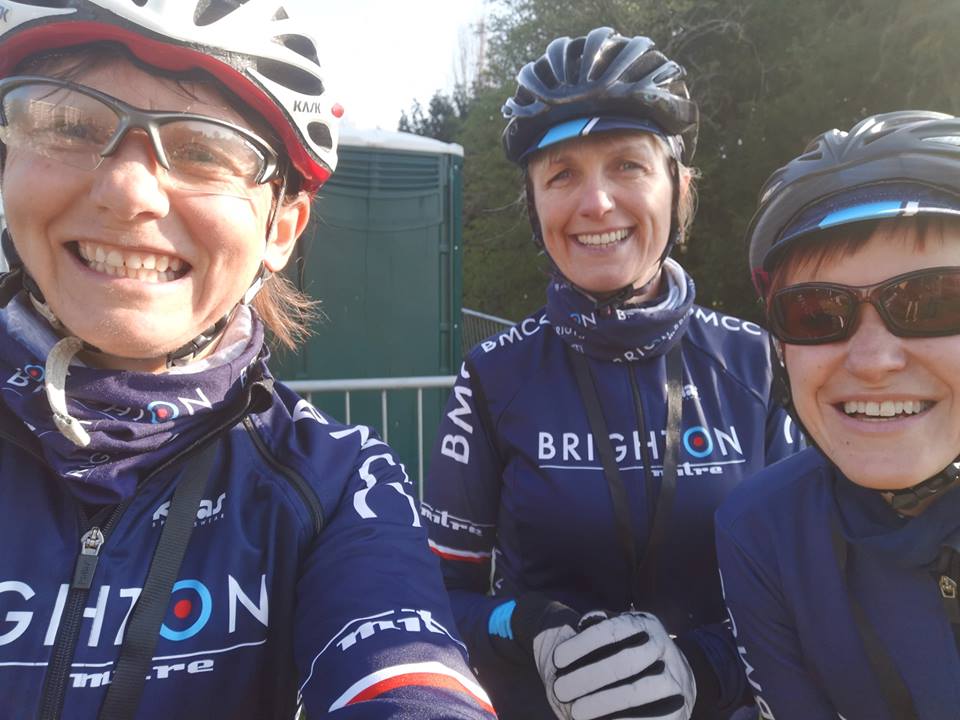 ~ Brighton Mitre CC Women Maria, Suzanne and Isobel prior to the marathon ~

The elite runners start at Withdean rather than at Preston Park. My guess is that this allows

them to have a flatter race than those of us mortals who must run up the hill at the side of
Preston Park and to avoid us getting caught up and slowed down in funnels which I have annoyingly experienced in that first mile.

Cycling buddy Suzanne was in charge and we were given our instructions. The male cyclists
would lead the male leader of the marathon and three of us female cyclists would lead the
women. If there was a break between first and second man and the same with the women,
we would break.

The race started and we led. My heart was beating fast and it was so hard to judge what the
pace would be. We headed out. I shouted at some guy riding his bike in the road to get off
the course very quickly, NOW! I looked behind me. There was a swarm of runners charging
towards us. It felt like we were being chased by a peloton as you may have seen in some of
the Grand Cycling Tours and events. What would happen if they caught us up?

I was asked to stay back to ride alongside the second woman. I couldn’t believe how fast she
was, and I was able to watch my bike computer to check her pace. At Ovingdean, as she ran
up the hill her pace didn’t seem to wane, even though we were running into quite a wind. I
had to put some effort in to keep up with her as I’m not the greatest hill climber on my bike.

Jill Collett, at around the halfway mark passed her and I became her silent partner. She
seemed to be on her own for the rest of the race. I can’t tell you how great it was to watch
her. She had a fixed focus on her face which didn’t change. People would shout out ‘go on
Collette’ and so I assumed this was her first name, but it must have been written on her bib. 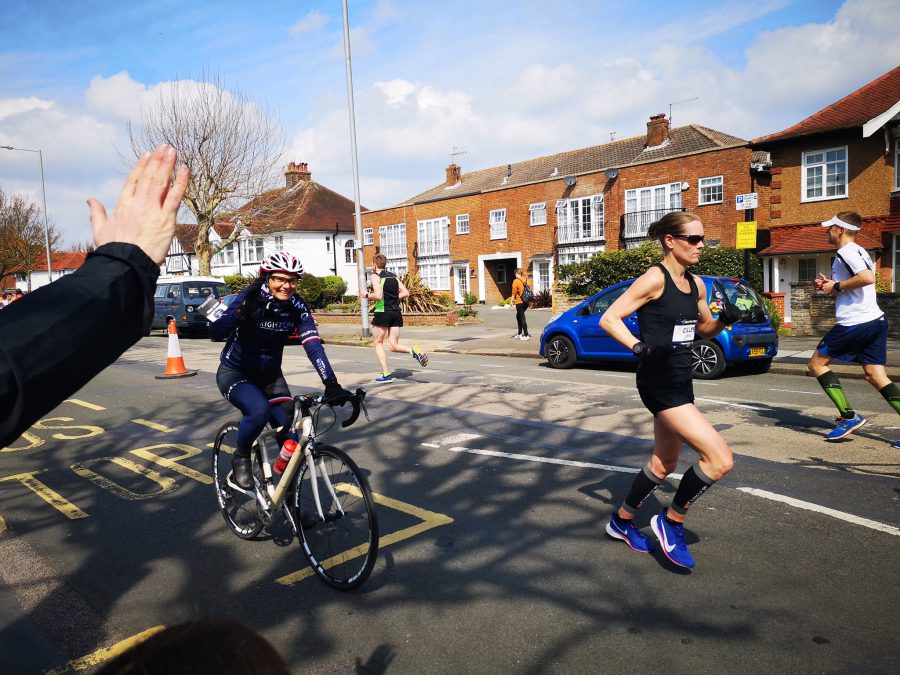 Occasionally I would see my friends spectating and they would shout out to me. I quickly put my fingers to my lips and pointed at Jill (my thoughts were, it’s not about me, and don’t
interrupt her focus!)

At the roundabout before the final 200m, we were instructed to peel off where I met
Suzanne and Isobel again, so I never saw her go over the finish line. I don’t know if she
found my silent companionship a help or a hindrance. I spent a lot of time behind her as I
found it too stressful to ride in front and keep the pace. I hope it was okay for her.

It was an incredible experience. I had to stay focused for the whole race. Now I have a new
admiration for elite runners. Everyone present that day ran or walked 26 miles, and each had
their own personal triumph or demons to battle with.

I’ve run many marathons myself. When I was much fitter, I’ve even been first woman a
couple of times (some marathons are very small indeed so it’s not quite as great as it
sounds, but I was still over the moon) To be at the front with elite runners was such an incredible
privilege.

Volunteering doesn’t need to be sports based. That’s just my own preference. There are so
many volunteering opportunities locally. Why don’t you give it a go? It could change your
life and the lives of others around you. Or why not tell us below about your experiences of
volunteering or being helped and supported by volunteers?

If you have run Brighton or London Marathon or are a cyclist and need a Sports Massage, it’s
still not too late.

You can check Maria’s availability and prices and book yourself for massage via this link www.mariapali.co.uk/bookings