Multi-talented Alice Reeves joined us to talk about How to Trust, Ask and Take, three actions that have proved useful to her while running a Marketing Agency, a quarterly Belongcon event, and publishing children’s books. 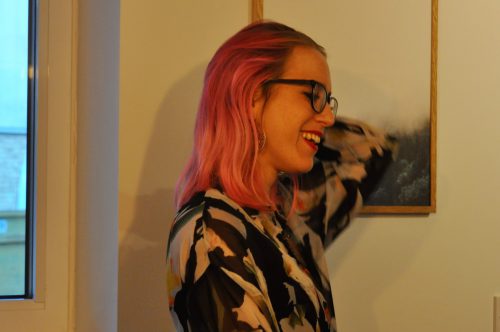 Read on to find how to utilise these actions for business success.

Just over a year ago a Ted Talk came at just the right time for Alice that taught her a valuable lesson in how to ask for help. The talk began with Alice asking us to raise our hands to illustrate just how many of us find it difficult to ask for help. The room was full of raised hands and there was general acknowledgement that asking for help can be a hard thing to do.

Alice admitted she had been terrible at it, even when it involved delegating to a team who were there specifically to help her. Referencing the Apprentice she quoted one of the contestants who had said – there’s no ‘I’ in team but there are five in individual brilliance. That’s how Alice had gone through life. She had quit her job so that she could take her children’s books seriously and to bring forth her event Belongcon and take on marketing clients. Soon she found herself drowning in an ocean of work and it was at this point that she felt the Universe came forth to put in front of her the message she really needed to hear.

The Ted Talk by Rock star and general Tour de Force Amanda Palmer came to Alice’s attention. This, Alice insisted, should be the one take-away from her talk, to watch The Art of Asking that had so inspired her.

During the Ted Talk Amanda Palmer talks about her experience as a street performer; as an 8ft bride she would hold flowers out to people and was fascinated by what she learned through the process. Meanwhile, she built up her music career and used the power of asking to great effect. Alice enthused that asking not only is a good thing, but it’s vital, in order to get where you want to be.

This was how Alice fundamentally shifted how she was going about living. She downloaded Amanda Palmer’s audio book where she learned in great depth how Amanda had used the power of asking in many different ways. From this book Alice took three key lessons – the first is to trust, the second is to ask and the third is to take.

This can be difficult if like Alice, you feel no one will be able to deliver as well as you could yourself. To overcome this hurdle, focus on the importance of the end result, rather than how you arrive at it.

For Alice asking was a sign of weakness. Despite feeling like this, Alice wanted to create an event where seven speakers would come together and share their experience of belonging. In order to set this up, Alice had to trust and ask others to speak using their own content for ten minutes. She also had to ask volunteers to cover on social media, she had to, as Amanda Palmer had put it, fall into her crowd.

Alice assured us that we can become more confident at asking. If you wince at the prospect of ‘no’, you might find that the people that say ‘no’ to you are not actually the right people for you to collaborate with anyway.

When it came to using this new found approach Alice used it to get the children’s book deal she had been trying to achieve. She attended an event of a well-known children’s book author and asked to go to lunch with her. Bringing along her books she asked the author for her thoughts and that led to an introduction to her Publisher.

Then Alice used this approach to set up a business with a business partner who she had recently met. After meeting Sophie Turton at an event she soon became aware of how well respected she was in her industry. After a drink and feeling confident that they shared the same values the second time they met Alice asked her, “Would you like to quit your job and have half my business?”. To her great surprise and relief, Sophie said that this had come at the right time for her and they formed a company.

For Alice the art of asking should not necessarily be framed as a ‘favour’, rather it should be seen as an opportunity for the other person.

The final piece of asking is to learn how to take. Help may not appear in the way you had imagined it might look. Alice told us to focus on the distinction between being committed to something and being attached to it. If you’re committed to something then you’re committed to the outcome and that’s all that matters. However, if you have a totally fixed idea about how something should look; or a totally fixed idea about what people should be offering that does not fit with your vision, then this may stop you from progressing.

Alice finished with her assertions that you should take without perceiving it as a favour, she said, “it’s not like taking a bank loan, you don’t owe anything”. People offer help because they genuinely want to help. If you have nothing to give, there is no harm in taking help, think of it as an opportunity for them.

“What I learned from my business coach Ebony Allard is that you can’t pour from an empty cup. If people offer help, take it, fill yourself up so you can help others. I invite you not to say if you’re offered help, ‘I owe you one’ or ‘I have nothing to give you’, just say ‘Thank You’.” 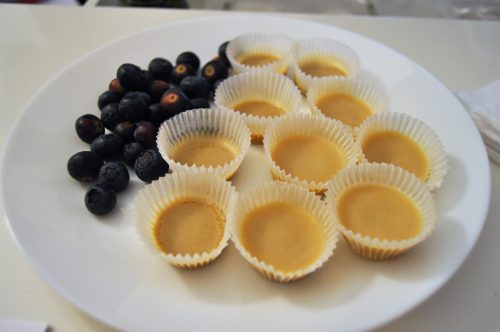 Josephine brought along some tasty nibbles and hand outs of the recipes for Basil Pesto bites and Tahini Fudge. She is currently doing free monthly nutrition talks and has one coming up at Brighton & Hove Therapies. Join us on Thurs 3 May for her talk on Nutrition for Fatigue and Stress. To register your interest click on the link Nutrition Talk, spaces are limited so don’t delay. Josephine also offered attendees a fabulous introductory 15% off her services until the end of May. To find out more about how Josephine can help click Josephine Cobb. 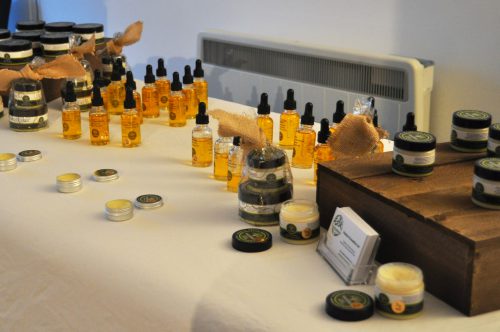 Margaret decided about 3 – 4 years ago to start trying out some fresh skincare recipes because she couldn’t find anything on the market that she really liked. She discovered that the products that she made gained her a lot of comments on how nice her skin looked and requests from friends to make them batches too. From there she started to look into EU regulations and she is now at the point where she is getting really good feedback and return customers. Margaret offered attendees at the event a generous 25% off her products. Click on the link Nadarra Cosmetics to check out Margaret’s range.

Join us for the next Healthy Business Hub where connections like this
happen every time.

We’re very excited about our next event where Lola Hoad will be talking about How to be Your Own Boss and Still Look after Yourself. Click on the link to book your ticket.

Words and pictures by Sarah Agnew, Social, Content and Photographer.